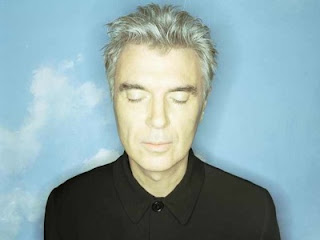 Last week at the David Byrne show, I turned to my row-mate and said, “How happy am I that there’s no one in these two seats?”

I didn’t know him, but our elbows had been touching for the last ten minutes so I felt I should make our relationship more formal. He agreed about my dumb luck about having an unobstructed view and pointed to the guy sitting just ahead of him and said, “Yeah, you could have had him in front of you.”

The gentleman he was referring to was big and happy and appeared to be The Most Enthusiastic Audience Member in the theater. He danced in his chair and clapped his hands over his head right from the very first note. Two songs in, he realized no one would be taking the seats next to him and he moved into one of them to give himself more room to sway.

“You jinxed it,” said my row mate, once it was obvious that The Most Enthusiastic Audience Member had taken up permanent residence directly in front of me.

I was actually delighted to have him sitting there. He personified half of what was electrifying about the show – the sheer exuberance of the crowd. It was palpable and contagious. Bespectacled men and graying women danced in the aisles. Arms raised in applause revealed happy, jiggly flesh. Before we left the house, my 17-year-old babysitter asked who we were going to see. The name David Byrne did not register. “Is that an Old People’s band?” I hadn’t thought so at the time, but looking around at the show, I guess I’d have to say, yeah maybe.

But even that was great. What a relief not to be the oldest fan in the room. I never once worried that a theater full of underdressed, over-tattooed revelers would look at me and wonder, “Hey, is that the drummer’s mom?”

Byrne played music from all over his career, much of which I’d once used as accompaniments for my college Modern Dance class assignments. If I’d have had a little more room at my seat, I could have performed my whole choreography to Born Under Punches, perhaps snatching the moniker of Most Enthusiastic Audience Member swiftly and definitively from our friend in Row K.

There is something about this guy’s music that will always speak to me. When I think of David Byrne, I think Intellectual, not Poet. I’m not saying he’s the smartest rocker, or even if I were, that that’s an especially good thing. I’m just saying that there aren’t many other people making infectious, danceable music that do it in that same heady way. I can’t really put my finger on what it is.

Maybe it’s the way his songs seem to move beyond the personal, even beyond the political, and sit more often in the ambiguously philosophical. Or, maybe it’s just that he has really good posture.
Posted by Jessica at 2:49 PM