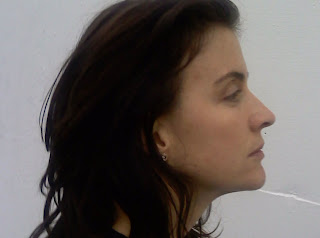 We all fancy ourselves badasses in Friday Tennis Clinic. We all dress in black. We curse a lot. (Well, I do.) Our conversations start out bawdy and just get bawdier. How hard is it to view yourselves as the NWA of the tennis club when the women playing on the adjacent courts have a median age of 70?

But we come to our senses when, like today, one of us turns to the group and asks, “Who has a tattoo?”

Not even Laura The Tennis Pro, which surprises at least me, as she does have some of the trappings of a tattooed woman. (Namely, that she participates in that Polar Bear Club insanity where you strip down to your bathing suit on New Year’s Day and run into the ocean.)

Eileen finally saunters in and, as far as I’m concerned, no one even has to ask. Of course she’ll have a tattoo. Probably something witty and irreverent in a place where few will ever see it. But I’m wrong.

She’s late, however, because she had to drive to tennis straight from our local precinct, where she had to post her own bail this morning and submit to fingerprinting before she was released on her own recognizance. She had explained the whole ordeal to me the night before, so her tardiness didn’t come as a surprise. “What do you mean you’re in Contempt of Court?” I’d said. Eileen is rarely in contempt of anything!

I don’t know about anyone else, but I was a little envious of her brush with the law. I imagine it feeling dangerously exciting to be fingerprinted, even if it is only for missing a date in traffic court. A completely honorable way to add a little spice into one’s middle aged day, the rest of which is likely to be spent baking cookies, or getting the cat de-wormed, or, like me, working far too long trying to figure out how to download a mug shot from my cell phone onto this [exceedingly foul expletive] computer.
Posted by Jessica at 4:27 PM