Dust In The Wind 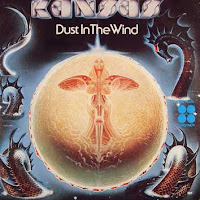 The teenager and I have a new game we play. We learned it from a friend of his. I don’t know if it has a name and even if it does, you’d never say it. Part of the strategy is to start the game before anyone else knows you’re playing. That assures you the first point. It goes like this:

We’re in the car driving and the radio is on. The game starts out of the blue as someone yells out the name of the artist whose song is playing. Then in the same breath they recite the score: 1-0-0 (if it’s the three of us playing). One for the guesser, zero for the others.

Even if one of the boys gets that first-point-edge, I usually win the game. We listen to classic rock stations. It’s all “my music.”

But oddly enough, I don’t win by a landslide. My son can get most of the Beatles’ songs in just a few notes. I can never identify an Eagles song as such. And for some reason, I can’t tell the difference between Aerosmith and AC/DC.

Sometimes it takes me the entirety of a song to actually pinpoint the name of the artist. Songs that I know every word to. Songs that I can picture the band members. But I just….can’t….place…the…CHEAP TRICK!!! I’ll pull it out somehow right as the song is ending. (If you call it afterward, it doesn’t count.)

I try not to be smug, but I take a certain amount of pride in being the only one in the car who can name Jimmy Buffet. It gives me the littlest bit of street cred with the boys, but more importantly I think it might be helping my hopelessly enfeebled memory.

In the last year or so, I really can’t remember anything. Food burns in the oven, I sit in store parking lots racking my brain to recall my purpose for being there. I’ve put things in the microwave and 30 seconds later have no idea what I’ll find in there when the bell rings.

I’m not sure if the “radio game” will reverse any of that – it might. In the meantime, I’m spending my Friday night in the kitchen, surrounded by eight teenage boys. My son’s friend and I are having a face off in the minutes before they all go out to play Man Hunt on this first warm spring night. “ERIC CLAPTON!” I yell, “3-3.”

“GRATEFUL DEAD! 4-3!” I can get most Dead songs within the intro, even without a working memory.

There’s also no reason for me to be spending my Friday nights at home, playing silly games with a bunch of teenage boys – arguably the most immature subculture of our species – except that I know this won’t last. That soon they will all have better things to do on a Friday night than hang around someone’s house playing Man Hunt. But while they’re here, I want to relish it. I want to remember it. I want it to be as clear and as indelible as that Kansas song I just scored. The one where you close your eyes for a moment, and the moment is gone.
Posted by Jessica at 7:02 PM

Email ThisBlogThis!Share to TwitterShare to FacebookShare to Pinterest
Labels: parenting