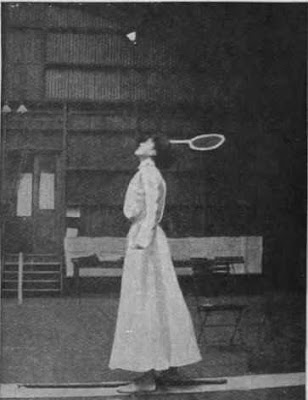 Monday, we played on a new court. It was sunny and 75 degrees, and we all played amazing tennis. We’ve been playing together for a while, the four of us, but something clicked on Monday and we were so enamored of our performance that we took time after every game – sometimes after individual points – to marvel at how well we were doing.

“Wow,” said one of us. “It almost looks like we really know how to play this game.”

Buoyed by Monday’s great match, I trotted off to an evening clinic on Tuesday night. The wind was calm and I ended up on a court with women I knew and liked, so I fully expected to have another peak tennis experience.

Unfortunately, the drills were all about hitting overheads. Some people call these shots “overhead smashes,” but my overheads don’t smash. At best, they plop. They’re my worst shots, I dread working on them, and it quickly became clear that we weren’t going to do much else that night.

Within 20 minutes I could feel all my self esteem drain from my body. I plopped one after another crappy overhead over the net. No snap. No smash. Just plop, plop, plop.

When the drills were finished, I thought perhaps I could redeem myself during some actual games. But as well as I played on Monday, was precisely how poorly I played on Tuesday. It was like some physics law involving equal and opposite energies.

I’d been feeling that same irksome physics law in my day-to-day living as well. One day on top of the world. The next day spent pulling myself up out of the gutter.

Disgusted with my inability to hit a high ball, I called one of my tennis instructors and splurged on a private lesson. “I need to learn overheads,” I told him. “And I need more power to my serve.”

He watched me for ten minutes and then summed up all my problems:
You have to go to the ball.
You have to wait for the ball to come to you.

I’ve been thinking about that advice all week, frustrated that it makes no sense at all.

Then tonight I started thinking about it in terms of my life – in relation to getting work, to writing, and maybe most profoundly, in relation to raising a teenager – and suddenly it did begin to make sense. In fact, it made all the sense in the world.
Posted by Jessica at 2:53 PM

Email ThisBlogThis!Share to TwitterShare to FacebookShare to Pinterest
Labels: Parenting (sort of), tennis