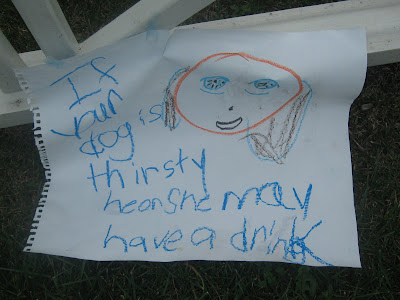 I was driving down the street yesterday when I saw this sign.

It says “If your dog is thirsty he or she may have a drink.” The sign was taped to the base of a fence at the edge of a sidewalk and next to it was a paper-plate bowl filled with water. I can’t think of a simpler or more direct example of Karma at work: offering it up; providing for whoever may need.

I tried to hold that image in my heart all day, opening doors for people and keeping my temper in check with the Verizon Wireless woman when I called about my bill. I even held my tongue when the teenager called to tell me he’d lost his backpack on the first – actually not even the first, the before-first, orientation – day of school. What I’m saying is, I saw this sign and made a big, fat effort to spew forth goodness all day long.

Nevertheless, the baby bird that landed on our driveway, the one that my son and his friend spent the whole afternoon photographing, videotaping, feeding worms and looking for its mother, died last night in a little shoebox in the garage. We had a small service and buried him by the fence. Then I spent a wrenching hour trying to convince my son that the death was not his fault.

In between rolling my eyes about karma, I spent a lot of last night in that agitated place I dwell the night before school starts. I really hate change of any kind and I’m equally unfond of letting go – two life positions that seem about as un-Buddhist as one can get.

I held doors open for people all day long! Why did the bird die?

My son was distraught and, at the ripe old age of ten, deigned to let me hold him for a long time before bed. The circumstances sucked, but the end result was the same. I got a moment – a long, juicy, delectable moment – to really hold onto him again before having to release him back into the world.

And I wonder now whether that wasn’t my provision after all.
Posted by Jessica at 5:23 AM